Flowers From my kitchen9. June 201516. November 2015
Funnily, this dessert, that I’ve eaten countless times during my childhood – mostly on garden party occasions in our back yard. But have since neglected, inexplicably, is apparently called “Swiss Roll”. At least, that what pinterest recently indicated it as. Around here, it’s simply known as a “Raspberry Roulade” or “Biscuit Roulade”, which I find slightly more accurate (considering I’m also “Swiss”, ahem). Nevertheless, I quite like the notion of “Swiss” labeled food, from “Swiss chard” (which we simply call “Krautstiel” or “Mangold”) to “Swiss cheese” (which, just to make this clear, isn’t really much more than a category – or rather geographic – description…).
Anyways! The point is: this sweet dessert was shamefully neglected for much too long around this space here (and in my tummy). I love the simple yet sophisticated approach. Rolling a simple, nicely moist and soft biscuit (or sponge) and filling it with seasonal berries, tart and sweet at the same time… What can possibly be more appealing?
I’d quite like to throw my own garden party, inviting all the friends I haven’t hugged in much too long, eat and (maybe) sing together and toast to each others’ health and happiness and eat cherries and drink lots of lemonade and home made iced tea. The guests would wear breezy dresses and shirts in crisp whites and candy colors, and pair them with bare feet. I’d wear these sandals that I’ve spotted a while back on etsy and have been lusting after ever since. Well, I ordered them already, and the lovely Beatrice from greece makes them by hand and wrote the most lovely note that she’s going to start on my beauties very soon. In other words: i’m ready for this lush summer garden party of my dreams! The only hitch being… Well, that we haven’t got a garden. In a way, my balcony is my garden (or as such i treat it, at least), but it won’t hold the 20 or so people i envision it to. So i’m postponing this part of my dream, and rather eat this piece of delicious swiss or biscuit raspberry roll on my balcony. A twosome can be a nice thing, too. 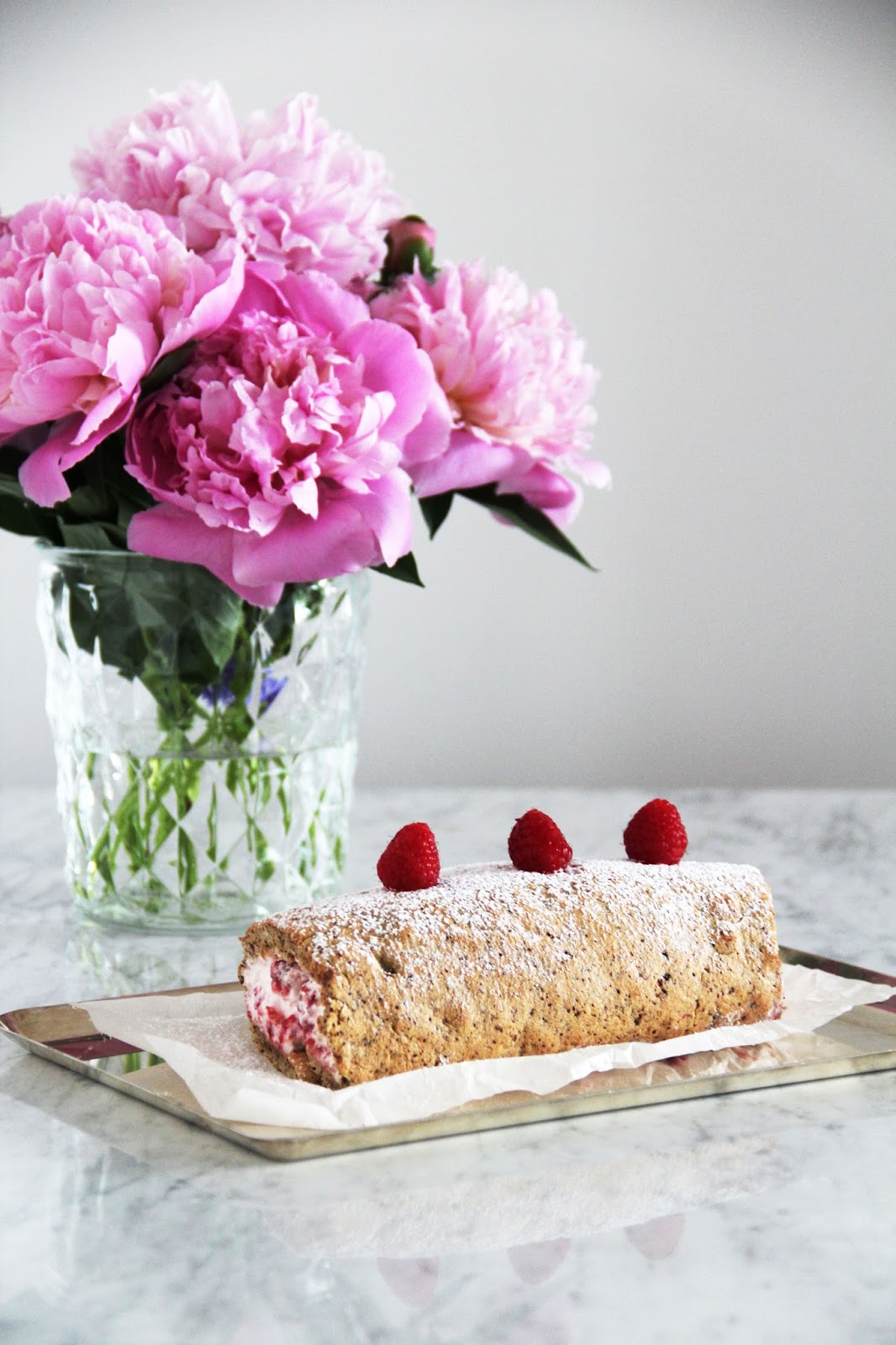 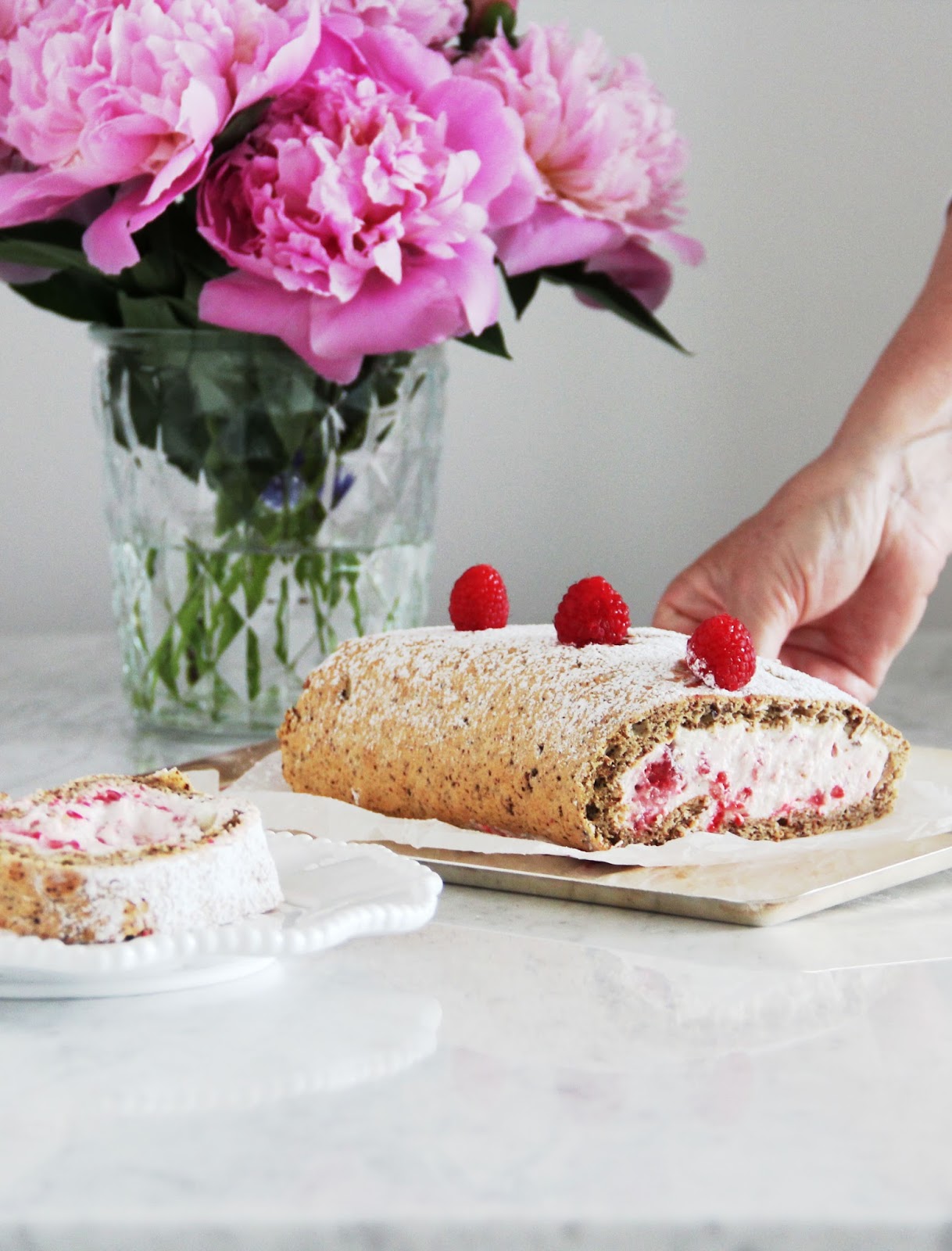 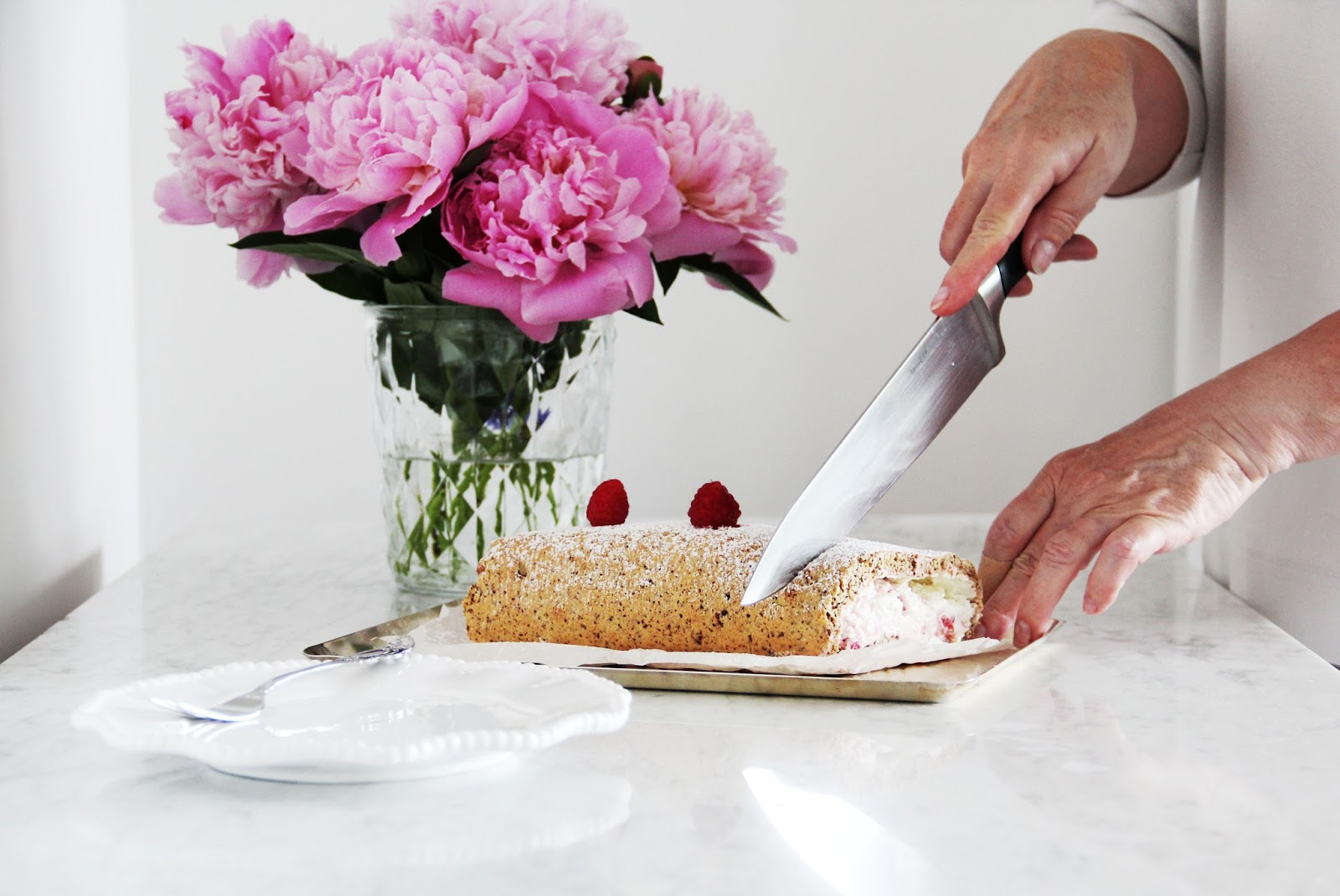 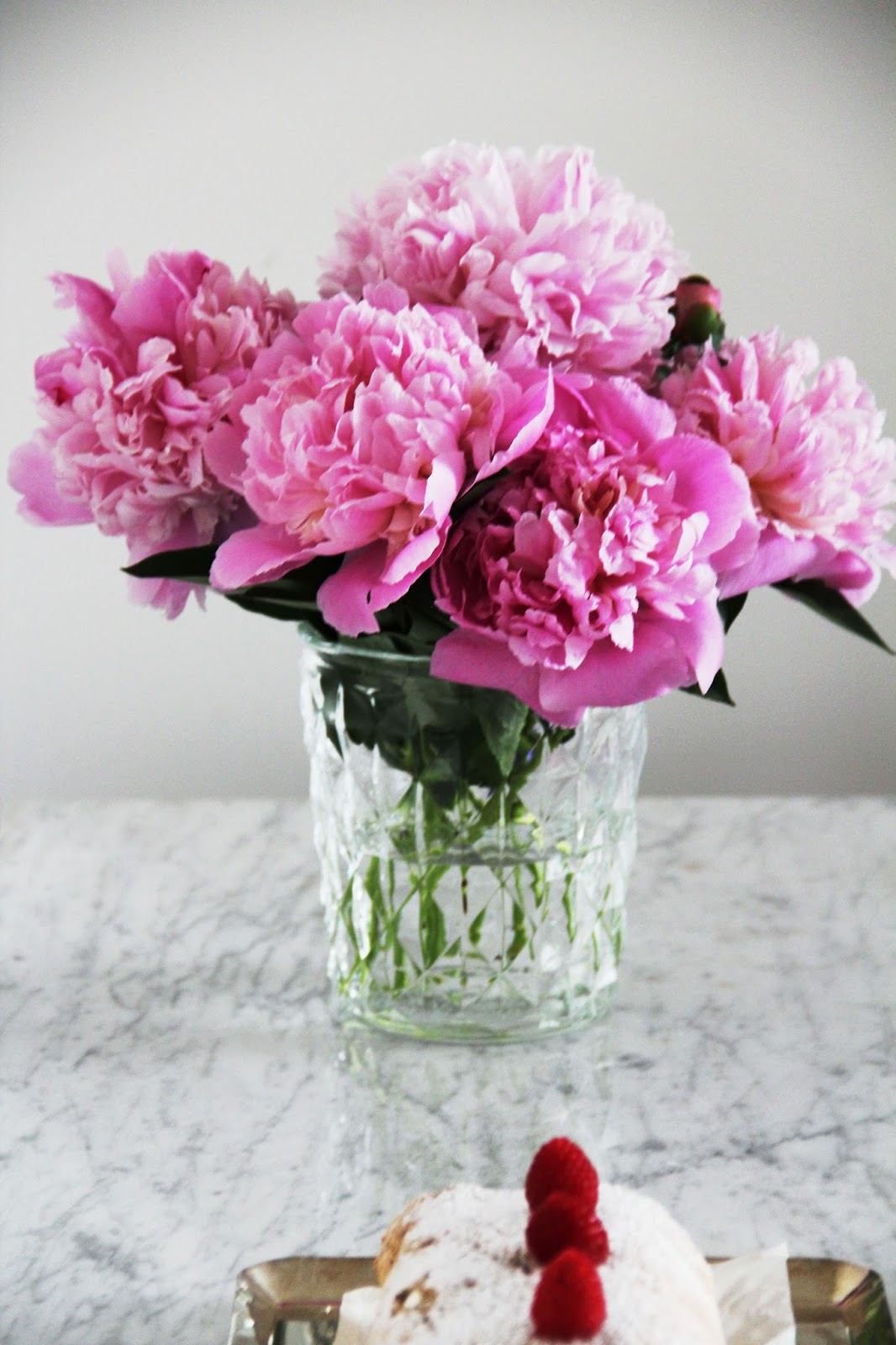 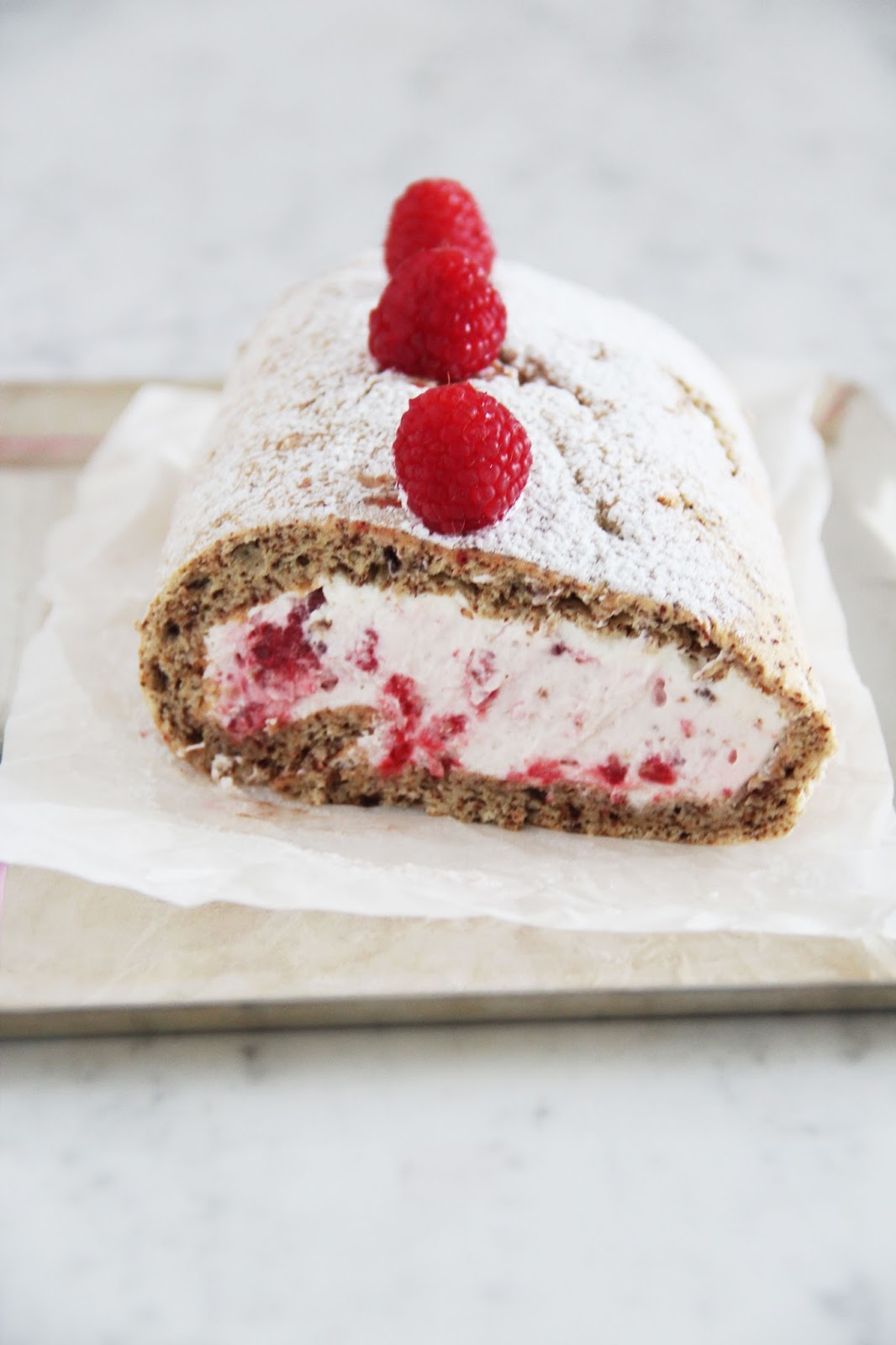 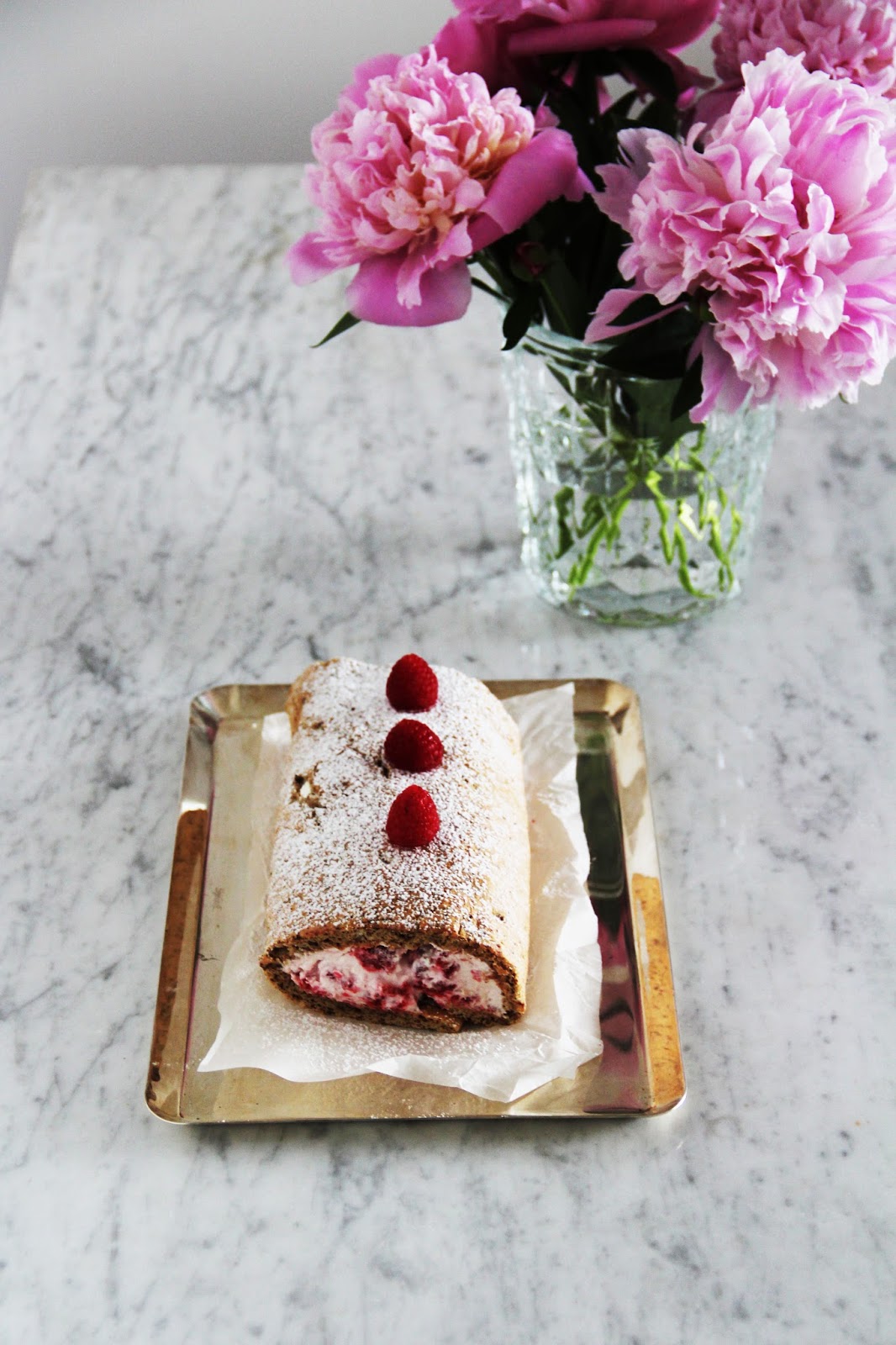 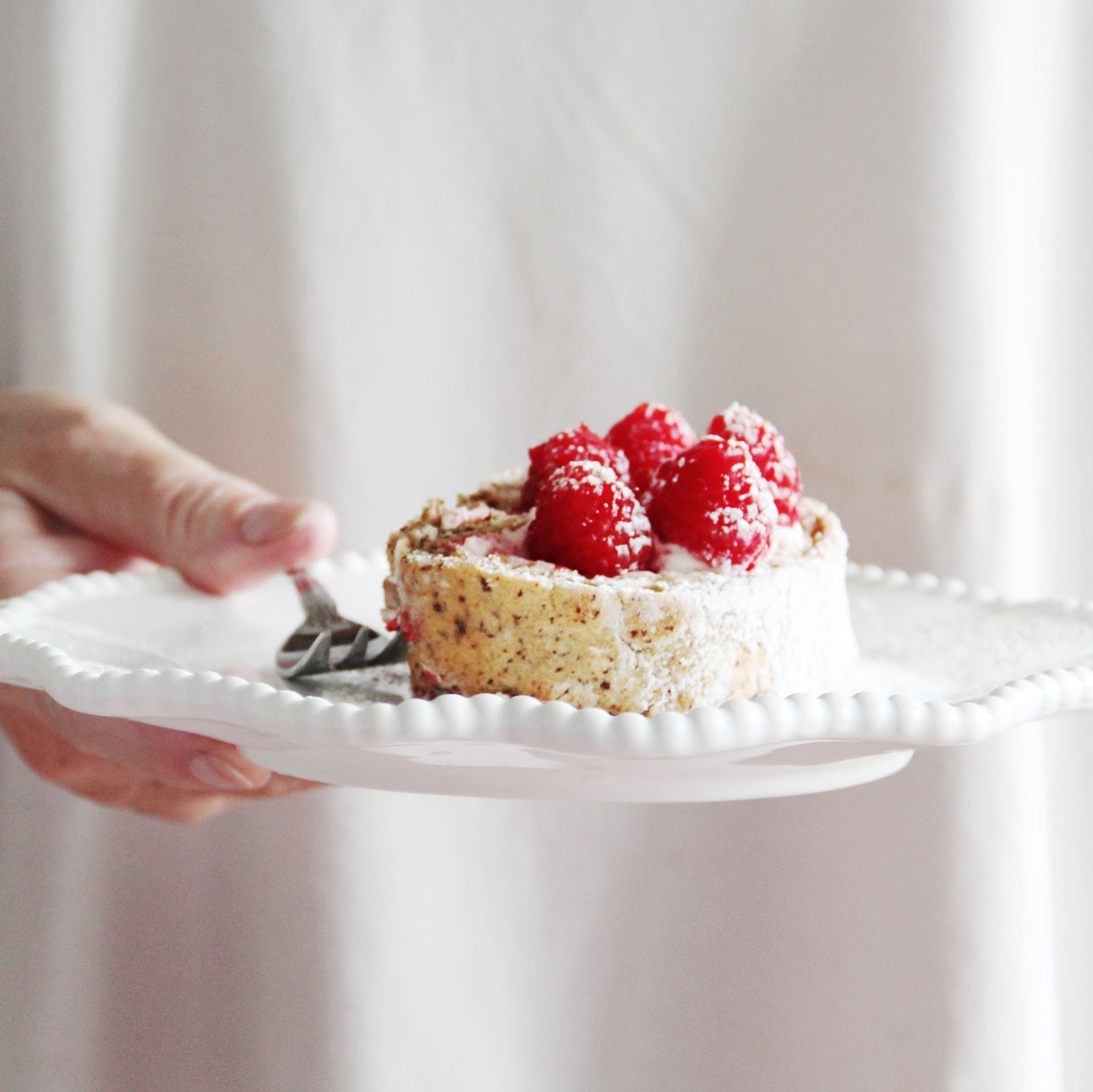 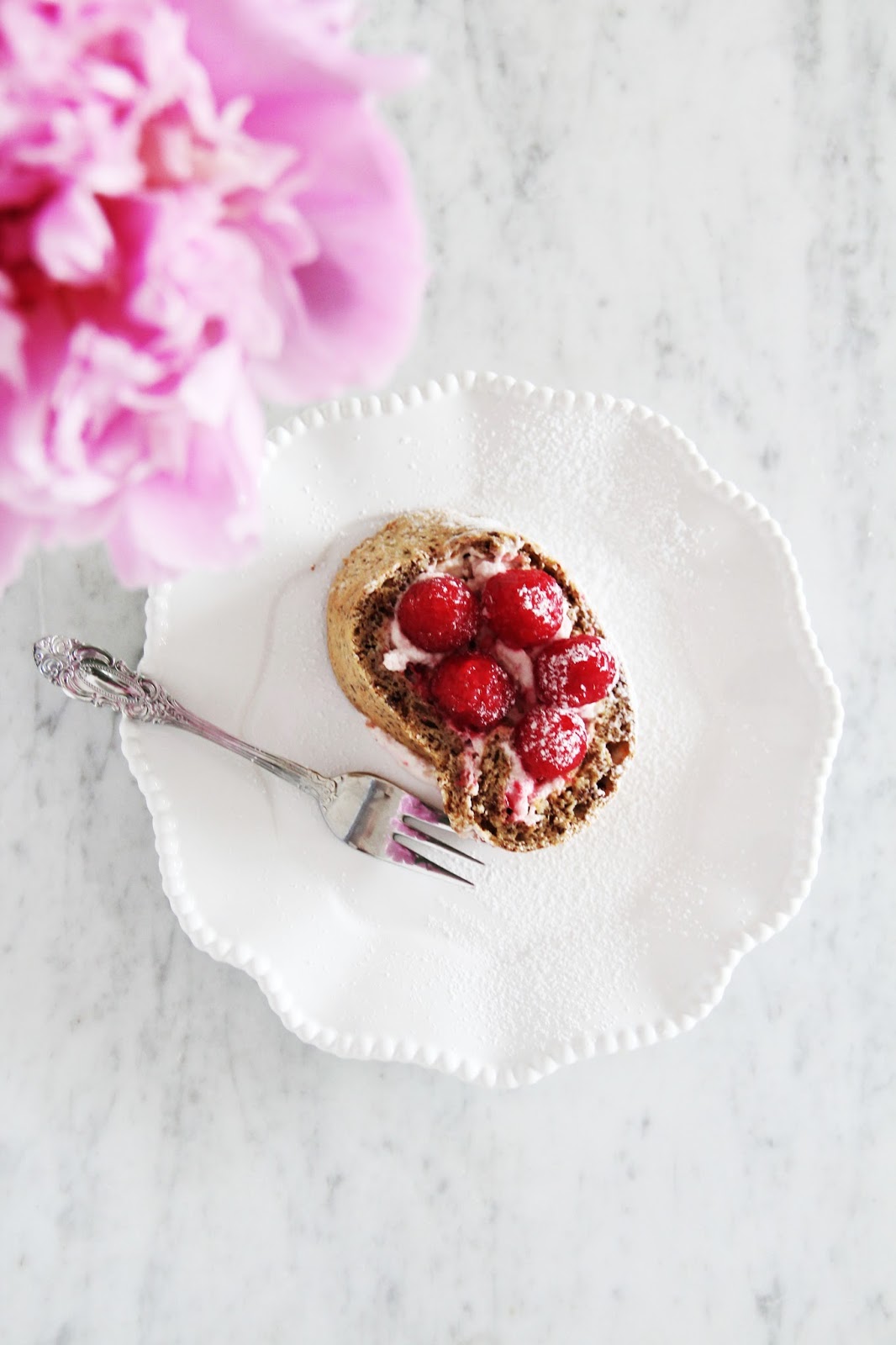 Raspberry Swiss Roll
Recipe adapted from elisabeth fülscher
Ingredients:
4 egg yolks
70 sugar
1 pinch salt
1/2 vanilla bean, scraped
50 flour*
50 g dark chocolate, finely grated*
4 egg whites
400 ml heavy cream
500 g raspberries
2 packets (40 g) of vanilla sugar
confectioners’ sugar for dusting
spare raspberries for decorating
* note on the (chocolate) sponge: you can make the sponge with chocolate, like we did, because it makes for a nice pattern among the cake. if using chocolate, use 50 g flour and 50 g grated chocolate. if not using chocolate, replace with 70 g of flour instead and omit the chocolate.
Directions:
line a baking sheet with parchment and preheat the oven to 200 c / 400 f. in a large bowl, combine egg yolks, sugar and vanilla and beat until foamy over a warm bain marie (ca. 15 minutes). then beat cold over a cold bain marie (ca. 5 minutes). beat the egg whites together with the pinch of salt until very stiff. now alternately fold the egg whites, sieved flour and grated chocolate into the egg yolk mixture. immediately spread out the dough onto the prepared baking sheet, to about 1cm thickness, into a long rectangle. bake for about 8 to 10 minutes or until the biscuit / sponge is lightly golden brown and baked through. immediately after baking, turn the sponge out onto the work space lined with a clean kitchen towel. remove the parchment paper. lightly sprinkle with sugar. then roll the sponge together with the towel into a long roll. fold in the ends of the towel to create a parcel, cover with another towel. the idea behind the rolling and covering is, that the roll develops steam under the covers and thus remains soft and pliable / rollable, while at the same time staying moist. let cool completely.
in the meantime, prepare the simple filling. whip the heavy cream, sweeten with the vanilla sugar and add the whole raspberries and fold them in. some might crush and that’s okay. unwrap the roll and spread the whole sponge rectangle with the raspberry whipped cream, evenly. roll up carefully. place the roll on a cake platter, with the open side facing down. decorate with raspberries and dust with confectioners’ sugar. refrigerate or eat immediately.
note: the filling can be made with some “whip it” (“sahnesteif” or “rahmhalter” in switzerland). which makes it a little more thick and thus help the roll to keep it’s shape. i’m a fan of simplicity, though, so i left anything out, taking the risk of a slightly “flatter” roll. fine by me, it was eaten immediately, anyway. harr.
Summer HomeChilled Tomato Soup with Cumin